Though term has ended, Eastbourne College remains open each weekday for any enquiries regarding admissions, future visits or the general running of the school.

Elite and recreational programmes providing tennis for all

The College provides tennis for all, including an all-year-round programme for elite senior players. Our programme successfully puts the Eastbourne name on the national stage every year. 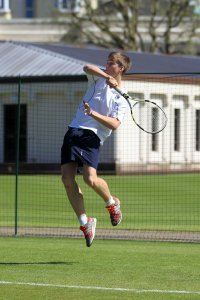 The summer is the key term for tennis: team and recreational players are involved in a full training programme with fixtures against other tennis schools in the South East. In addition, there is all-year-round tennis available for those who follow other sports. The College’s senior mixed team reached the LTA senior student national finals twice in the last three years.

We benefit from our close proximity to Devonshire Park Tennis which allows us to play on some of the finest the grass courts in the country. The Nature Valley championship takes place at the end of June which College pupils can attend.

In 2019, the College further developed its close relationship with the Nature Valley International Tennis Championship so that coaches, officials and players could benefit from the proximity of the world-class facilities housed in the College’s new state-of-the-art Winn Building. The College fed all of the officials, event and ball crews for the duration of the tournament, and was delighted to provide some ball boys and girls too.

Alongside a strong academic programme, the sixth form elite tennis programme is in place to provide tennis excellence for players who aspire to county and national standards of play. The programme runs all year round with a capacity for 12 players to train and play throughout the winter and into the summer. On top of squad sessions, there are one-to-one sessions with top coaches as well as player-led sessions. Winter squad sessions move indoors to the local David Lloyd Centre (DLC), or to the College’s recently built sports centre where individual and group strength-and-conditioning sessions take place. This programme of tennis and academic pursuits enables players to achieve full tennis scholarships to top US universities.

Luciano Cestari, the head coach at DLC, runs sessions with the top squad during the winter.

Simon Gent, head of tennis, oversees players and coaches throughout the year at all levels, including supporting the players in the elite programme.

The College provides an all-year-round programme for elite senior players.