Yesterday, Eastbourne College pupils and staff took a short stroll down to the beachfront to take part in the annual Aquathlon.

Beautiful blue skies, calm seas, warm water, a high tide and ideal air temperatures all aligned so that around 60 competitors could decamp to the start line opposite the famous Eastbourne Bandstand.

An aquathlon is a continuous, two-stage race comprising a swim followed by a run and the sport falls under the ‘multisport’ umbrella term recognised by British Triathlon. It was introduced to the College by Headmaster Tom Lawson who wanted to take advantage of the College’s proximity to the sea and is a wonderful addition to the Michaelmas term, which also includes a whole-school steeplechase up on the nearby South Downs.

Starting in the water and swimming parallel to the beach, pupils began with a 300 metre swim across three groynes before exiting the water and making their way up the beach to the transition area where they changed into their running gear to complete the final stage, a two-mile footrace along the promenade to Holywell and back; the finish line being on Western Lawns.

The event attracted a great deal of interest from local beachgoers who were impressed with the pupils’ athleticism and commitment. College lifeguards, including GBR triathlete and Old Eastbournian Noah Canby, worked with the local lifeguards to patrol the waters close to the swimmers and to offer encouragement during the first stage, while other College staff were positioned at regular intervals along the promenade to steward the run.

Congratulations to all of the pupils who put themselves forward for this race. It takes a great deal of character to pitch oneself against the elements and overcome barriers when the going gets tough. 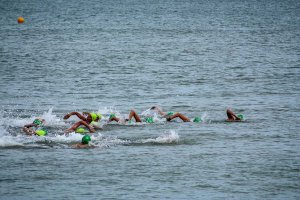 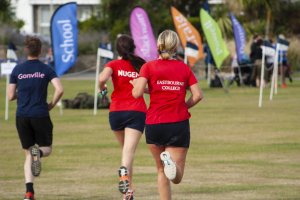