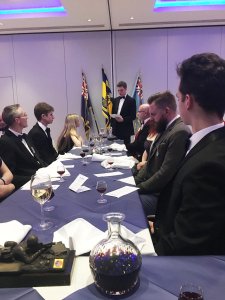 On 7 March, the officers and senior cadet NCOS from all three service sections attended the annual CCF dinner, held to thank the senior cadets for their service over the past four years, and to introduce them to the traditions of the formal military dinner. After pre-drinks, diners were drummed into dinner by the College’s own marching band and then enjoyed three delicious courses, followed by the traditional toasts and then speeches to accompany the port.

The evening provided an opportunity to bring together the senior cadets and adult volunteers along with some close supporters of the Contingent. The Chairman of Governors, Headmaster, Maj Gen (Ret) David Thomson CB MC and Colonel Kevin Hearty QVRM, TD (Colonel Cadets for 11 Bde) were guests. Cadets learnt about dinner etiquette and the Contingent Commander, Colonel Lamb took the opportunity to thank all the staff – both teaching staff but also those non-teaching staff who gave up their own time to  support the unit. Cadet WO2 Tom Stewart-Blacker read a short piece on those who have been lost in conflict and can no longer be with us whilst Cadet Sgt Oscar Boulter, spoke movingly about his grandfather, a highly decorated officer who fought in WW2.