On their first CCF Field Day, Year 10 recruits to the Army Section took part in seven activities: air rifle shooting, archery, a drill session with one of their newly appointed NCOs, a teamwork challenge (using metal detectors to clear a safe route through a mock minefield), an introduction to platoon harbours, an introduction to the observation skills required for good field craft, and a familiarisation lesson on the rank structure used within the cadet movement. Also taking part was the Sixth Form Section of new Lower Sixth formers who have chosen the Army Section as their service option for the year. While four of the activities were directed by adults, three were led by Upper Sixth NCOs.

For each activity, the eight sections were assessed and scores awarded. Results were announced, and prizes presented in front of the whole company during their following training afternoon. In addition to the inter-section competition, at each activity the names of promising cadets in each section were put forward for consideration for Best Cadet.   Many congratulations to Flo who won the accolade of Best Cadet this year. As well as being appointed as a Chosen Cadet, she was presented with a plaque to keep to mark her success. 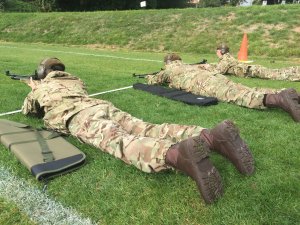