Clare Balding on getting ahead 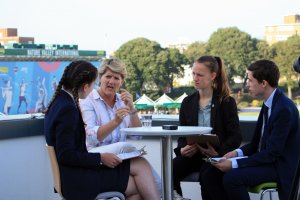 This is the second instalment in a series of accounts given by three Eastbourne College pupils who were given the unique opportunity to interview internationally renowned author, broadcaster and journalist Clare Balding during the closing days of the Nature Valley International Tennis Championship last month.

Last week, we gained insight into Billy’s experience as he painted a picture of his experience using broad brushstrokes (touching on the many topics discussed during the interview), and this week we feature Leila’s account which focuses more on Clare’s advice for those following in her footsteps.

Most of all, I was struck by just how open and humble Clare was, despite all her amazing achievements. She began by telling us that reaching the point where she is now was by no means easy and there were definitely difficulties and challenges along the way, but the key to her success was always saying ‘yes’ to things and being brave enough to get out of her comfort zone. 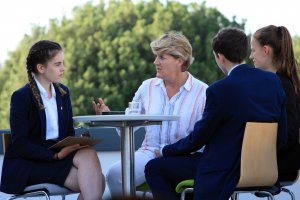 Clare gave us invaluable advice about pursuing a career in journalism and broadcasting. She explained how she began by writing for a student newspaper whilst at Cambridge University; then, she started working at a racing paper and later went on to get a job on an early morning racing bulletin on radio. Afterwards, she was offered her first TV job. At the time, TV and radio were extremely male-dominated areas, which makes her success all the more impressive and inspiring. She encouraged us to start by focusing on something which we are particularly passionate about (in her case horse-racing), as having a good knowledge-base about a specific field will give you the confidence that is so crucial to kick-starting a successful career. Most of all, she emphasised the importance of being proactive, telling us, ‘no one else should care more about your career than you.’ 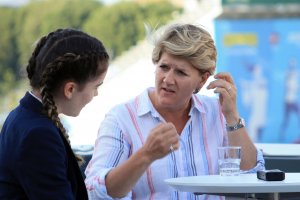 I also found it particularly fascinating to hear about the most memorable sporting moment of Clare’s colourful career, which she says was, by far, the London Olympic Games 2012. According to her, the incredible, ‘sense of a shared experience’ was what made it so special, as, for her, the power of sport lies in its unique ability to bring people together. She was also particularly keen to stress how significant it was that the Paralympics were, ‘for the first time, genuinely parallel to the Olympics.’ This, she says, ‘changed the way the Paralympic Games are perceived,’ as well as our ‘attitudes to disability’ as a whole. 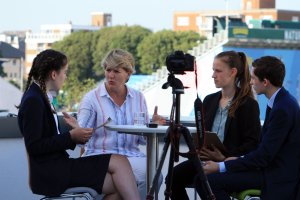 Given the fact that Clare is an English graduate and an author, we were very interested to find out about the things she has read that have spurred her on and inspired her through such a successful career. She talked about a book called Stop Drifting, Start Rowing by Roz Savage, which details the author’s decision to leave her high-earning office job (and supposedly perfect life in the city) to row solo across three oceans to raise awareness about the environment. Clare said this is the book that has had the most impact on her due to its messages about finding happiness through leading a meaningful and fulfilling life.

Clare is an admirable woman and a true inspiration. Her main aim has always been to change the world and she felt that she could best do this by going into media and journalism and changing the way people think. Certainly, her passion for charity, diversity, women’s equality and the Paralympics really came through, as well as her resilience and determination, which has got her to where she is today.