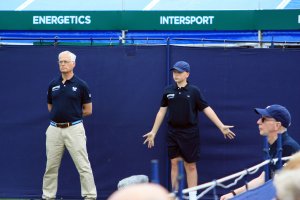 Challenging conditions for our ‘ball crew’ pupils down at Devonshire Park this morning as the main draw gets underway. Rain clouds lingered all morning amid high humidity on the ground, with a smattering of light drizzle dampening the perfect turf enough to postpone play for an hour and a half just before lunch.

Before the break, Edward and Samuel were out on court five making sure that doubles opponents Radu Albot (singles ranking 41) and Guido Pella (singles ranking 26), and Maximo Gonzalez (doubles ranking 27) and Horacio Zeballos (doubles ranking 12), had everything they needed for their match. The stronger pairing on this occasion were the higher ranked doubles specialists Gonzalez and Zeballos, who took the match by two sets to love (6-4, 6-4). The boys did a superb job, staying focused throughout and listening intently to their trainer Katie James who mentioned that they were doing very well for their first time out.

On court three, Maisie, Jasmine and Kristina were being tested as much as the players in a somewhat disjointed match that saw American Danielle Collins (singles ranking 34) bow out after five games to Yulia Putintseva (singles ranking 39) due to a leg injury.

All of our ball crew are doing an excellent job and eagerly await the appearance of Andy Murray and defending champion Caroline Wozniacki (ranked 14), who is currently playing Belgian Kirsten Flipkens (ranked 80) on centre court – we have just heard that some of our pupils will be ball crew for this match; more to follow. British number one, Johanna Konta cruised past Ukranian Dayana Yastremska yesterday (6-2, 6-4) and is through to the second round. 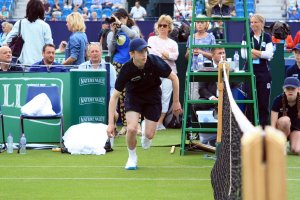 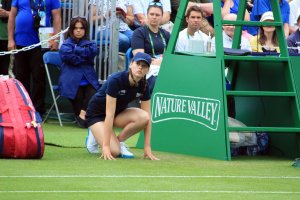