Together as one, the Eastbourne College community gather on Remembrance Day and Armistice Day in a series of events that remember those who paid the ultimate price for the freedoms we enjoy today.

My friend, you would not tell with such high zest To children ardent for some desperate glory, The old lie: Dulce et decorum est Pro patria mori.

Lest we forget, the school community pays tribute to those who fought and died in the world wars, more than 12,000 British servicemen and women killed or injured since, and the communities convulsed by conflict and war across the world today.

Close to our hearts, the school also commemorates those pupils who gave their lives in pursuit of freedom:

Remembrance Day this year was marked with our traditional Remembrance Day service in College Chapel. The chapel was full to the brim with over 300 in the congregation. Eastbournians experienced and took part in a number of moving hymns, prayers and readings orated by cadets, and Deputy Head Co-Curricular, Colonel Anthony Lamb MBE DL, delivered a sobering address. His address pointed out that this was not the time to move on or to do something different, that keeping the memory alive was everything, ‘Every single loss of life during conflict is a personal tragedy and the memorials in each village, town and school remain as poignant reminders of the scars; we must never forget that.’

The service was followed by a contingent parade with over 300 taking part in an Act of Remembrance on College Field, including governors, pupils, staff and military personnel; pausing to mark the 11th hour. Captain (retired) Mark Harris (OE) laid a wreath on behalf of the Eastbournian Society and a group of pupils also marched through Eastbourne as part of the town’s commemoration event.

Armistice Day was marked by two whole-school events, an Act of Remembrance at the commemorative Memorial Arch, and a Remembrance concert and reflection in the evening, at All Saints’ Church.

In 2018, the College celebrated its 150th anniversary with a world-first 3D Video Mapping Show. The show dedicated significant time to honouring the pupils who fell in the world wars and other conflicts since.

Click on the thumbnails below to view hi-resolution images of the Armistice and Remembrance Day events. The majority of the photos are courtesy of Liz Helmin (Yr 13). 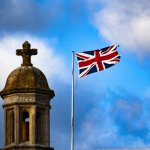 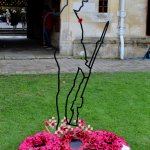 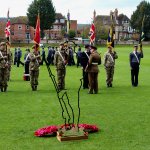 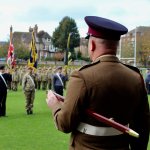 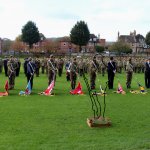 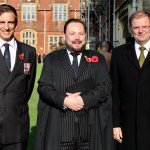 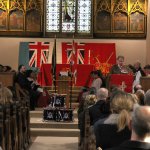 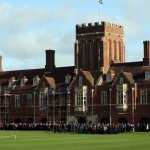 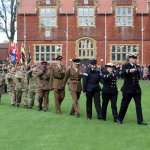