Headline sponsors of the Eastbourne Triathlon

Eastbourne College is delighted to be the headline sponsor of the Eastbourne Triathlon which will take place on 15 June 2019. 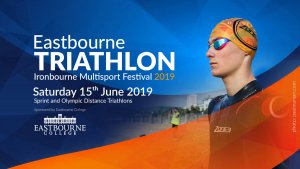 Eastbourne has a strong affinity with the sport of triathlon and is home to several elite athletes training as part of a long-established British Triathlon Satellite Centre (in association with Team Bodyworks). With the announcement of Eastbourne College’s support of the Eastbourne Triathlon, and the rapid growth of the sport, the town is set to become a sought-after destination for triathletes both as a training centre and a race venue.

We are delighted to have the opportunity to be headline sponsor of this event. Eastbourne College takes great pride in partnering with community-based enterprises that promote the increasingly held belief that healthy living and learning by the sea contribute to what Exeter University scientists described as ‘blue health’. Some of our pupils will compete in the Eastbourne Triathlon and we are confident that our show of public support in 2019 will enthuse, inspire and motivate many more to join one of the fastest growing sports in the world.

The 2019 Eastbourne Triathlon will feature new and improved swim and run routes, as well as the addition of the longer Olympic distance race alongside the existing sprint distance event. Athletes of all abilities and experience, from novice to elite, are expected to take on what is widely considered to be one of the most scenic triathlons in the country. Starting from Eastbourne’s famous beach, triathletes will take on an iconic route, swimming against the backdrop of the historic pier, cycling on scenic roads through the South Downs National Park via Beachy Head and running on the promenade to Holywell, before finishing on Eastbourne’s Western Lawns.

“Ideal sea conditions, beautiful surroundings and a spectator-friendly seafront venue, along with numerous hotels and easy transport access, make Eastbourne the ideal location for hosting a triathlon. We believe the Eastbourne Triathlon has the potential to become one of the most popular and successful triathlons in the country and we’re making a long-term commitment to bring a world-class, annual triathlon event to the town.” Matthew Dowle, Race Director.

The sprint distance event is an ideal choice for novice triathletes, consisting of a 750m swim, 18.3km cycle and a 5km run. The Olympic distance race consists of a 1,500m swim, followed by a challenging 41.5km cycle and a 10km run. There are also relay and aquathon (swim/run) options for both distances.

Entries are now open and, with places limited, are expected to sell out quickly. More information can be found at www.eastbournetriathlon.co.uk.