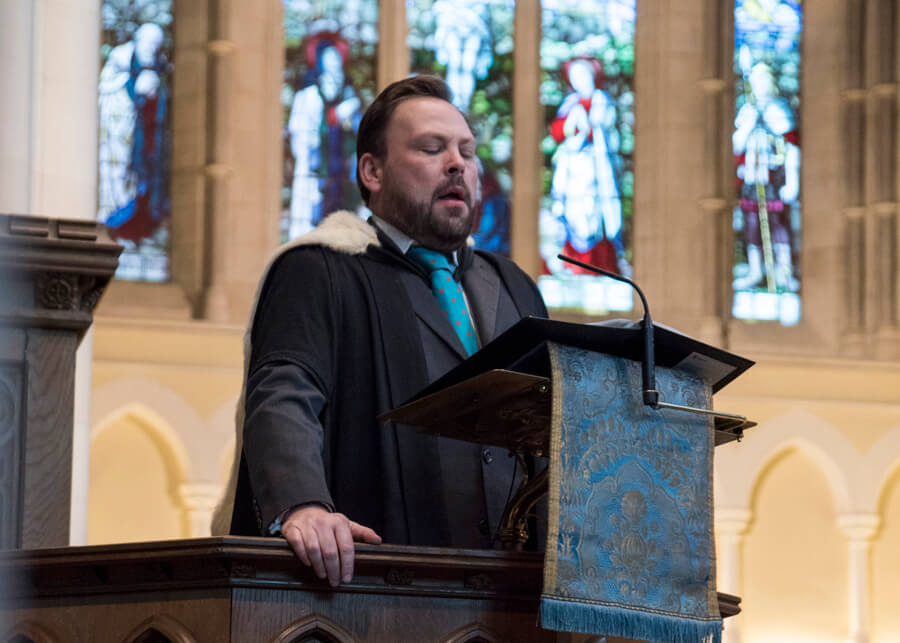 The whole school gathered for the end of term assembly  on Friday and the Headmaster opened proceedings with the following address and words of advice:

So there I was…, hurtling straight down a mountain in the Swiss ski resort of Davos. Above me only blue sky and piercing winter sun, below me compact, perfect white snow, dazzling and reflecting as if all the world was brightness apart from the dark blob of gore-tex encased mass that was me. In contradistinction to the serene stillness of the white, I was converting gravitational potential energy into fear with alarming rapidity. Straight down the mountain I was heading, on a direct collision course with a smattering of gingerbread-house snow-rooved cabins; just distinguishable people sipping gluwein or hot chocolate innocent of the F whose MA was heading in that direction. It seemed to me at that point, as I mused panickedly with my behind uncomfortably clenched (this was more a result of the idiotic design of salapets, and was frankly the least of my problems)… it seemed to me that I was faced with a starkly binary choice between crashing violently into that group of people and buildings, or intentionally throwing myself to the ground. I was like a bedraggled bullet, gaining MV2 with the haste and expedition that mechanics mercilessly determines when your mass is quite considerably more than doctors would recommend and your velocity is increasing thanks to standing on two slick fibreglass planks, specifically designed to glide effortlessly on snow. My previously-faithful friend, friction, who in my lifetime hitherto had dutifully prevented my painful upending, was noticeably absent.

Except I wasn’t there. I was at a conference about education at Windelsham House prep school, pleasingly static in a chair, in safe, flat, West Sussex. My concentration the only thing going downhill. The flashback to my past exploits was triggered by one of the speakers mentioning Davos, which apart from being a ski resort next to Klosters is also the home of the World Economic Forum: an annual meeting of the world’s most influential politicians, business leaders, scientists and writers, that conspiracy-theorists believe to be evidence of the New World Order that actually runs things, a theory that is not entirely without merit. The World Economic Forum’s Future of Jobs survey makes for interesting reading. We face what is known as the fourth industrial revolution. The first was steam, second: production lines, electrical and combustion power; third the computer age; and now ‘a digital, connective revolution that will see billions of people connected by mobile devices, with unprecedented processing power, where storage capacity, and access to knowledge, are unlimited. And these possibilities will be multiplied by emerging technology breakthroughs in fields such as artificial intelligence, robotics, the Internet of Things, autonomous vehicles, 3-D printing, nanotechnology, biotechnology, materials science, energy storage, and quantum computing.’

As a result of these changes 65 per cent of people entering primary school now, for example, will be in jobs that do not yet exist. And this has changed what skills will be rewarded most in the jobs market. The WEF predicts that by 2020, before most of you enter work, the key skills for jobs will be markedly different from what they found when they surveyed in 2015. Complex problem solving remains top of the list, and next critical thinking. But by 2020 number three will be creativity, which used to be in tenth place and then people management, coordinating with others and emotional intelligence. The last one wasn’t in the top ten for 2015.

The skills you learn by being good friends; the teamwork you gain in a house activity, choir or sport; the participation, kindness, courtesy, and empathy you develop here if you are good to each other; will be crucial to your future success along with the critical and analytical thinking you can develop if you embrace independent higher-order work like the Extended Project.

In a world where robotic skills have no value for humans, because robots exist to do those jobs, creativity becomes the distinguishing mark of value, the human edge. Your art, your music, your drama, your invention are soon to be key to your worldly enrichment as they have for so long enriched your cultural and spiritual being.

This time last year I spoke about turbocharging 2017. Some of you have done so, but perhaps it was bad advice because some of you put your pedal to the floor but have no traction control, your car spinning and swerving wildly as if on ice. Perhaps instead of focusing on your drive, I should have talked about your steering. Emotional intelligence and some of the other skills that will be valued in the future are also known as ‘steering cognition’ – the ability to navigate the world, to change direction, to adapt.

There are three reasons why today’s transformations represent not merely a prolongation of the Third Industrial Revolution but rather the arrival of a Fourth and distinct one: velocity, scope, and systems impact. The speed of current breakthroughs has no historical precedent. When compared with previous industrial revolutions, the Fourth is evolving at an exponential rather than a linear pace.

So for you, it is not just that the jobs you will do are not the same as the ones around now, it is that you will live in an era of disruptive change; rewarding and exciting for people who are adaptable, flexible of mind but morally centred. Add to this the fact that you will live past one hundred, and you realise how important it will be to be able to change and respond to circumstances over a lifetime of multiple, changing careers.

And this, of course, is the key reason why I was faced with only two disastrous options as I hurtled down the Davos mountainside. It was the first day I had ever been on a ski slope; I had not yet learned to turn. The way to do it is to cut this way and that, swishing, elegant parallel turns that gracefully allow you to descend, just as your steering cognition and transferable skills will allow you to safely effect the changes of direction you will need in the fourth industrial revolution. I had set off before learning to turn (I was showing off, and the reason for that, and the unusual inclusion of Physics GCSE equations in my memory, is a story for another day)… I had set off before learning to turn… and was doomed to go faster and faster out of control. To this day I have a three-inch titanium plate, nine screws, and two staples holding together my left shoulder and upper arm as a result of my decision to tumble intentionally having reached that speed.

Anyway, enjoy the ski season…, any snow and ice if it comes, and never forget the value of developing your emotional intelligence and creativity to steer your way through life. Happy Christmas!