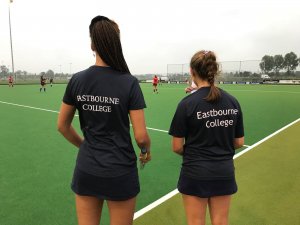 In the last week of the summer holidays 51 girls and eight members of staff travelled to Zaltbommel in Holland for the annual pre-season hockey training camp. This year we took an U14/U15/U16 and U18 squads with the new girls in U14 squad starting College for the first time. The College has enjoyed an excellent relationship with the hockey club MHC Bommelerwaard for over 15 years. The Club has three pitches and the College teams had full use of the facilities for training throughout the day and then enjoyed training games against the age group club teams in the evening. The matches were competitive but played in an excellent spirit. The parents and board members of the club were so impressed with the way the girls played and conducted themselves that they have invited the boys out for a preseason camp in October.

The three full days of training allowed the girls to bond together, especially the new Year 9 group, and the fitness, coaching and match practice was excellent preparation for the term ahead.