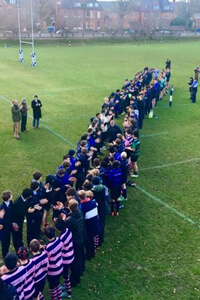 On Thursday 14 December, the inter house finals took place for girls hockey and boys rugby. The atmosphere and standard of sport on display was an excellent way to finish the last full day of term. In the girls hockey at Beresford, the Juniors (Years 9 and 10) cup was won by Blackwater and the Seniors cup was won by Nugent. At the same time, the inter house  boys rugby was taking place on College Field. Craig won the Year 9, Year 10 and Year 11 tournaments and the seniors title went to Pennell House.

And finally in a lovely touch in recognition of their contribution to rugby, a tunnel of appreciation was formed after the senior 7s final for the last rugby season for Mr Beer after 30 years taking College rugby teams, Mr Hall for 15 years and Mr Chu for 13 years. It was a fitting end to an excellent term of sport.