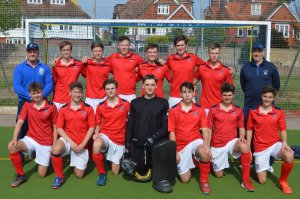 It is unusual to be playing hockey in the summer term but Eastbourne College’s 1st XI boys hockey team qualified for the National Plate semi-final after beating Seaford College in a very competitive game last week. Both sides played superbly but Eastbourne were the first to force the early pressure, which saw the Seaford goalkeeper make a series of excellent saves. Eastbourne defended well but couldn’t convert their territorial and possession advantage into goals and went into half time 0-0. Cameron finished a well taken quick free hit from the Captain George to open the scoring early in the second half. However our boys couldn’t score a second goal and it was down to some brave defending in the closing minutes for Eastbourne to earn a place in the finals tournament at Lee Valley National Hockey Centre in the Olympic Park next week. Magdalen College will be the opposition for the National Plate Semi Final match on Wednesday 1 May.