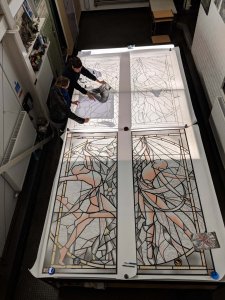 Work is underway on two stained glass windows for the dance studio in the new Winn Building.  The College was chosen as the venue for a prestigious international competition organised by the Worshipful Company of Glaziers.  The project is being overseen by award-winning  craftswoman Helen Whittaker who in 2018 created the Queen’s Window in Westminster Abbey with David Hockney and the RAF centenary window unveiled by HM the Queen at the RAF Club.  The commission winner, Jessica Lambinett,  whose specialist glazing skills are much in demand in her native France, has already been to the College twice with her mentor Helen and they are now creating her winning designs in Helen’s studio.  The windows have been commissioned as a centenary project by the Arnold Embellishers, a group of College supporters who, since 1919, have been providing enhancements around the school.