Having won the Sussex County Division 2 title last term, the U15 girls tennis team travelled to play at the Sutton Tennis Academy  on the outdoor clay courts yesterday and claimed the title.

After a strong performance and victory in the semi final, the girls faced Tormead, from Guildford in Surrey in the final.

After the number 1 and 2 singles and second doubles, we were 1-2 down.  However the team rallied in the second round, saving match points in the process, to level the score at 3-3.

It came down to a 10 point T Break shoot out and, after a positive start, Elo and Sasha won 10-5, to triumph in the final.  This is the first British Schools LTA event that the College has won outright. 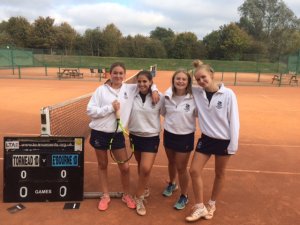