Tennis team third in the nationals

The girls and mixed Senior Student teams travelled to Bolton over the weekend to compete at the national finals of the British Schools LTA finals.

The girls team finished fifth in GB with a win over Clifton and close losses to St Mary’s Ascot and Wakefield Girls.

The mixed team did even better finishing third nationally. There were close-fought 3-1 wins over Bradfield and Framlingham and an agonisingly close struggle vs Rugby. With the match score at 2-2 a 10 point Tie Break shoot out took place and, despite a 7-4 lead, Rugby fought back for a 10-8 win. Achieving third place in the national finals is a fantastic achievement and our highest finish in a GB national schools event ever.

Congratulations to all the players who played and represented the College so well over the weekend at the finals. Their team spirit and sportsmanship were remarked upon by the LTA officials and they were a credit to the College. 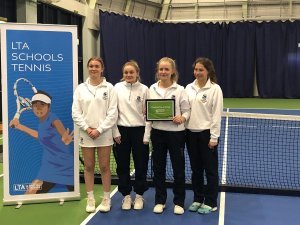 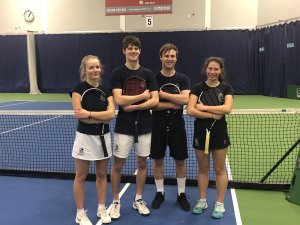