Our 1st girls tennis team were in action yesterday at the Independent Schools Finals.  Playing superbly, Ellie and Valentina were just edged out in the semi-finals by top seeded Queenswood so finished an impressive third. Second pair Eleanor and Phoebe reached the quarter finals where they lost in three close sets to the other finalists Culford.  Of all the schools nationally,  only the College and one other school each had two pairs in the last eight.  The girls have had such an impressive season and it isn’t over yet. Good luck as they move to the National Schools Finals at Nottingham next week and  Aziza and Katie will be joining the squad. 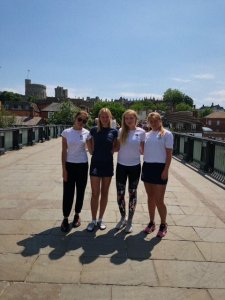