Our beautiful seaside town was the perfect backdrop for last Saturday’s Triathlon. Around 250 athletes of all abilities and experience took on what is widely considered to be one of the most scenic and challenging triathlons in the country. The event was organised by the highly experienced triathletes Matthew Dowle and Dale Anderton with support from headline sponsor Eastbourne College. A strong field of elite athletes competed for a place on the podium including former Eastbourne College pupil Luke Howard in the Olympic distance race and current Eastbourne College pupils Noah Canby, Alex Field and Freddie Dunkley in the sprint distance. A number of Eastbourne College staff also participated individually and as relay teams. 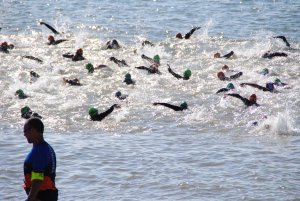 Sprint Triathlon participants took on the challenge of swimming 750m from the Wish Tower to the Pier, a 18.3km bike ride through the scenic South Downs National Park and a 5km run on the Eastbourne promenade. The Olympic distance consisted of a 1,500m swim, followed by a challenging 41.5km cycle followed by a 10km run.

Huge congratulations to Upper Sixth pupil and GB triathlete, Noah Canby who took first place in the podium for the overall sprint triathlon in the under 40 category, being the only participant to complete the whole sprint triathlon in under an hour. Alex Field and Freddie Dunkley also took admirable positions in the under 40 sprint triathlon. Congratulations as well to Old Eastbournian Luke Howard who came second overall in the Olympic Triathlon. The College staff relay team also hit the podium in the third place.

It was an absolute pleasure to be the official sponsors of the Eastbourne Triathlon, and it was fantastic to have pupils, ex-pupils, staff, ex-staff and parents all involved in some way. 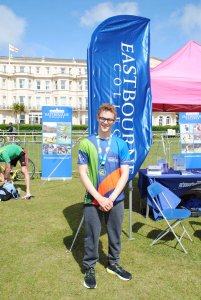 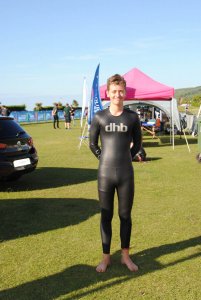 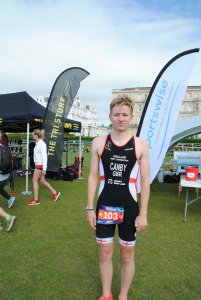 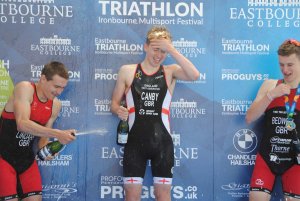 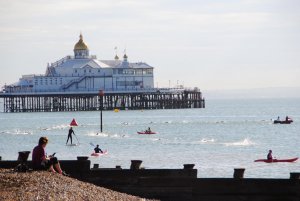