During the Easter holidays, Lower Sixth pupil Sam Williams had the chance to grab some vital experience at one of the biggest competitions in the world windsurfing calendar.

The five-day RS:X European Championships attracted 333 competitors from 43 different countries spanning six continents. This was the main selection event for the 2020 Olympics in Japan.

Sam competed against 110 other youth boys all wanting to be the next cohort of Olympic athletes. Unfortunately, his injury last Autumn, and the concurrent time off the water, reflected in his overall position. He came 82nd overall.

The racing conditions were excellent in general with 12 -15 knot winds and low swells on the final day but the level of physical exertion throughout the week-long event was demanding. Windsurfers were expected to be out on the water for up to five hours on any given day and the organisers and sponsors provided a flotilla of ‘coach boats’ that buzzed around between races refuelling and rehydrating them.

Sam was disappointed with his position but has taken plenty of positives from the experience and was happy with his performance on the penultimate day, when he was placed fourth out of nine in the British youth boy category.

Returning from Mallorca, Sam took the weekend to recover before teaching windsurfing and coaching the local junior grassroots team at Buzz Active in Eastbourne.

He also managed to fit in some holiday revision, much to the delight of his housemaster and tutor.

Sam continues to develop his windsurfing as part of the British Youth Squad and we wish him and his family every success going forward.

The official film from the final day of the RS:X European Championships 2019 can be found by clicking/tapping on the following link: https://youtu.be/QVn-HO7NBDM 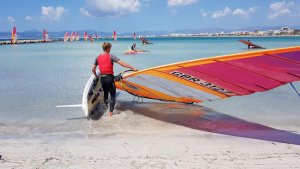 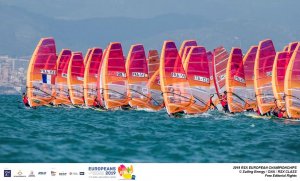