The grand finale of the College’s 150th anniversary celebrations was held on Saturday 15 December with a magnificent Winter Ball. Over 260 people came along to the dining hall in the Winn Building to enjoy a champagne reception (with musical accompaniment from the College Jazz Band), followed by a three-course meal and then dancing to a live party band to complete the evening. 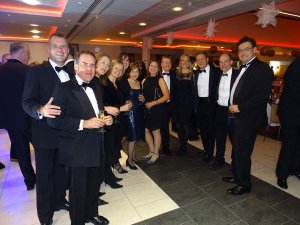 With a mixture of Old Eastbournians, College parents, members of staff and other friends and supporters of the school, it was a great occasion for bringing the College community together to celebrate not only the 150th anniversary but also the completion of Project 150 this year.

During the evening the original Stag painting ‘Ex Oriente Salus 150’ by Nicola King was auctioned for £2600. A prize draw was also held, the first prize of which was print number 1 of a limited edition of 200 prints of the Stag picture. This raised a further £1800. The proceeds of both of these are going towards the Foundation Bursary Fund, which helps support pupils with funding towards their education at the College. Our thanks to all of the guests who contributed.

After the meal the guests were entertained by the ten-piece band, The Big Kahuna, with a great selection of party music which got them dancing until just before midnight.

Thank you to all involved in organising this fantastic evening which was a perfect end to our 150th anniversary celebrations.