3D show behind the scenes 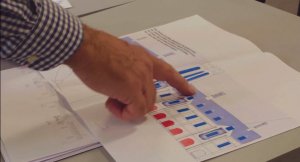 The ‘Behind the Scenes’ film crafted by Smokescreen Visuals gives a flavour of a little of what lay behind the final production projected onto the Memorial building on November 2 and November 3. Archive footage, stills, historical documents, architects originals were sourced; a narrative was created using hundreds of individual storyboards to record each moment of the piece, later translated into over 16,000 frames of animation; OEs were invited to submit images of themselves at work; a soundtrack was developed and the choir invited to overlay it with their original score; a script was produced and voice overs developed; green-screening used to insert individuals at certain points; digital mapping and drones recorded the building to within 2mm tolerance; mock ups were created; 25 different versions produced and tested; windows blanked to increase reflectivity; roads blocked to reduce headlight glare; 3 towers constructed and 6 state-of-the-art 35Kw projectors lifted into place; massive speaker systems installed; porters mustered for maintenance; and finally a band of top talent assembled for entertaining the audience on the night.

You can view the film again here: