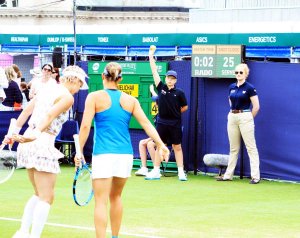 While lone Brit number 14 seed Johanna Konta battled bravely against a resourceful Ons Jabeur on centre court (yielding in two sets 6-3, 6-2), we went behind the scenes with the ball crews at the Nature Valley International tournament to find out what life is like away from the public-facing glitz and glamour.

It’s not all non-alcoholic organic champagne and line-caught caviar for our fearless ball crews during the week-long Nature Valley International Championship. Not far from the madding crowds, in a spacious area under the Congress Theatre, the boys and girls from Cavendish, Eastbourne College and Roedean Moira House reset themselves after their hour or so on court. The cool-off area offers tables and chairs, a screen for the crews to keep an eye on the latest televised matches and running order, and supervising staff.

The ball crews start approximately an hour or so before play begins at around 10.00am with a quick briefing from Katie James, the ball crew trainer and manager. Kit is donned (cleverly sponsored by Crew Clothing Company) and the girls have their hair braided so that standards of consistency are maintained throughout the tournament. Ball crew have rotating roles which change from day to day, match to match and within the match itself. Roles include recovering balls that have been hit out of court (sitting just off-court with quick access to the spectator walkways), net duty and feeding the pros with tennis balls when they are serving.

Every match at the Nature Valley International has a team of ball kids who are trained to move for maximum efficiency, while ensuring they do not interfere with active play. As well as dealing with the game balls, ball kids may also provide the players with other assistance, such as the delivery of towels and drinks, and holding an umbrella over their heads for shade. The end of the day for the ball crew depends on when the final match of the day finishes; some will be busy for up to ten hours.

Lunch for the officials and ball kids is provided in the Eastbourne College dining hall and there have been many positive comments about the quality of the food. During their breaks from court duty, some choose to wander the Devonshire Park grounds looking out for their favourite tennis player, grabbing an autograph, buying an ice cream and perhaps even meeting a pair of large yellow walking fruits as we did today (see picture of friendly Pineapple and Banana); at least everyone at the tennis got two of their five-a-day!

In other news, Kiki Bertens is one set up against Friedsam and number two seed Pliskova is through to the quarter finals, along with Cornet, Kerber and Halep. In the mens draw, an all British match has just started on centre court as Kyle Edmund takes on Cameron Norrie; the cheers can be heard across the Devonshire Quarter. 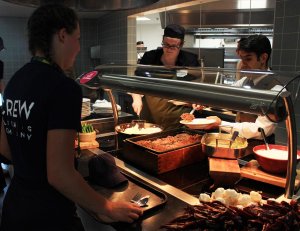 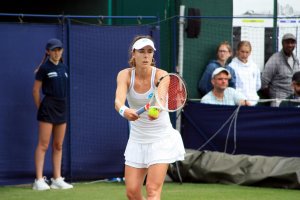 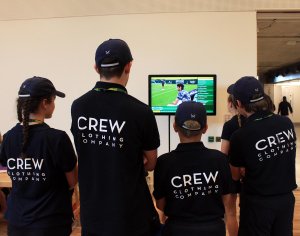 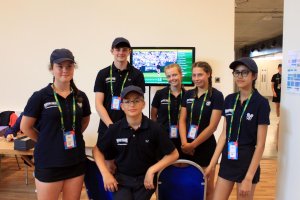 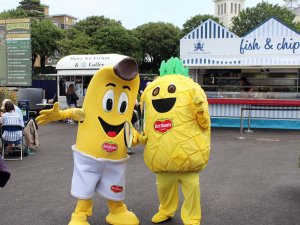 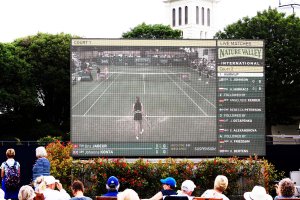