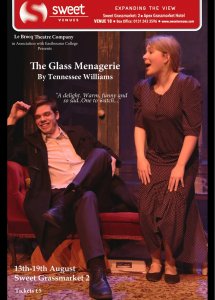 The drama department is gearing up to take the play The Glass Menagerie to the Edinburgh Festival Fringe next week. Back in February, Sixth Form pupils presented the play as one of their A-level set texts in College Theatre. The outstanding performance received widespread praise and the pupils will now have the opportunity to demonstrate their strong dramatic skills to a wider audience at the festival known as ‘the world’s greatest platform for creative freedom’.

Directed by Claudine Sinnett, the pupils will perform from 13 to 19 August at Sweet Grassmarket 2. An unmissable show if you are in the area. Book your tickets on the Edinburgh Fringe website