What a week it has been! And what a week it continues to be for those lucky Centre Court ticket-holders who have the opportunity to watch the culmination of a fantastic week of tennis at the LTA Nature Valley International at Devonshire Park.

At the time of writing, a match of somewhat Biblical proportions unfolds as the diminutive and nimble five foot seven inch Italian Thomas Fabbiano comes up against the six foot six inch long-levered American Sam Querrey; Will David prevail over Goliath in 2019? It is certain to be an equal fight as both players conquered top-seeded players yesterday.

Holding the Union Jack aloft after his all-British quarter-final comeback yesterday against a determined Dan Evans, Kyle Edmund pits himself against the phenomenal Fritz who yesterday beat Hubert Hurkacz in two sets; despite Hurkacz’s airborne acrobatics which made the Wilkinson Sword xtreme shot of the day and lit up the championships online media.

The women have provided some of the most exciting tennis of the tournament and also some of the biggest upsets. Defending champion, Caroline Wozniacki bowed out in the last 16 as did Konta to a solid performance from Tunisian Ons Jabeur, who made it to the semi-final today only to have to retire due to a persistent ankle injury which she incurred while cruising past Alize Cornet in the quarters. This means that fourth seed Angelique Kerber enjoys an extra day’s rest, a luxury that number two seed Karolina Pliskova could not pocket, although her two set victory over number three in the world Kiki Bertens today was more of a walk than a run (6-1, 6-2). 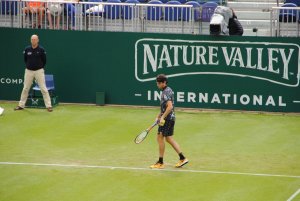 In among the fervour of the professional tennis, and skilfully dodging the handbags and the glad rags of the tennis fans on their way to court, a team of local school children from Cavendish, Eastbourne College and Roedean Moira House have provided the oil that keeps the championship whirring along at a reasonable pace. Without the ball crew (and other officials), a tennis event such as this simply wouldn’t complete itself quickly enough. Imagine the knock-on effect to the tour schedules if every ball that went awry had to be fetched by the player; it would resemble an advanced knock-about at your local tennis club and all of the commercial offspring that tennis generates would wither.

We love the fact that the pros are treated like heroes returning to battle, that their every whim is catered for. The ball comes to them, not the other way around and we lap it up because the pace of the tournament allows us to book an afternoon off and watch oodles of top-class tennis at an affordable price. Billie Jean King once said, ‘Tennis is a perfect combination of violent action taking place in an atmosphere of total tranquillity.’ We couldn’t agree more.

So, we hope you’ve enjoyed the tennis as much as we have this week. For nine days a year Eastbourne is on the global stage. Our charming seaside town and its Devonshire Quarter basks in the media attention that the LTA brings. The mainline train stations heave with positive tennis fans all sun creamed-up, laden with picnic-filled bags, scurrying towards the action, and the many locals who live within walking distance of Devonshire Park have somewhere to go to ogle their favourite tennis player, sneak an autograph or to just sit and watch the magic as it unfolds. For our ball kids, this has been one of the best weeks of their lives and for our interns, they have learnt a huge amount from their work experience. We thank the LTA for giving us the opportunity to be part of it.