Following the stunning 3D video-mapping show a couple of weeks ago,  we have received a  number of enquiries about some of the key Old Eastbournians featured in the ten minute show. We have produced a brief who’s who’ document giving a few more details behind some of the images and we hope that you find it informative. 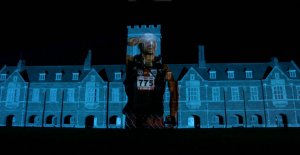 The Fields of Gold extract is sung by Mimi Helyar, current head of school;

Regarding the section about WW2:

This document includes information about other OEs of note that are featured.