In the week that began with the International Day of Commemoration in memory of the victims of the Holocaust, Eastbourne College pays homage to one of its longest serving ambassadors. An Eastbournian through and through, Peter Homburger’s story is a poignant reminder of the need for progressive narratives in the dynamic and, at times, tumultuous world of which we are all a part.

May 1939, on a platform somewhere near the Black Forest, Germany. Destination, England. Eleven-year-old Peter Homburger was on train six, one of the lucky ones.

The past few months have provided Peter with small reason to remain. Shot at and thrown out of school for being Jewish and refusing to recognise the Fuhrer, he has amassed more than enough first-hand experience of persecution. He has witnessed his father’s arrest and internment at Dachau, the family business razed to the ground during Kristallnacht (‘Night of the Broken Glass’), and the hushed conversations about what and who will be next.

Bewildered, unaccompanied and perhaps comforted only by earlier memories of an unruffled normality coarsely eroded under the Nazi regime, eleven-year-old Peter and his two older brothers (Walter and Wolfgang) board the Kindertransport train bound for Liverpool Street Station via docks in Holland and then Harwich, Essex.

Peter’s journey into adolescence and adulthood has been given a second chance and will begin again in Eastbourne, a relatively safe town at the time on Sussex’s ‘sunshine coast’. He will spend the next few years being educated and cared for by his new family at Eastbourne College. It is here that he will develop an extraordinary bond with the school, one that will last a lifetime… for it is this school he credits with saving his life.

Fast-forward 72 years to the present day and we join 91-year-old Peter Homburger as he takes what he acknowledges as his final trip from his home-town of Denver, Colorado, to England and to his beloved school. Despite the vast geographical distances, for nearly 75 years Peter has been one of the school’s most loyal and generous supporters, having donated on a number of occasions to the charity. He is also one of the longest-serving overseas representatives, serving from 1961 to 2019.

Peter arrives at the school with an entourage of close family members and their spouses. Nestled on the doorstep of the South Downs National Park, this seaside alma mater has some new additions since his last visit. However, he recognises the school not for its bells and whistles but for the enduring DNA that brought him there so many years ago. The school is a diverse community with educational purpose but above all it is a welcoming place.

What a lot of people don’t know, is that John Nugee (headmaster at the time) was a great guy!’

How far that little candle throws his beams! So shines a good deed in a weary world.

William Shakespeare, The Merchant of Venice.

Peter is a man who has spent his post-adolescent years being thankful for the opportunities he received while at school in England. He bears no bitterness despite all that he has lived through. An unassuming character with sharp intelligence and a quick wit, these days he prefers not to be drawn on or defined by the politics of his story. Peter simply wants to connect with his old school one more time, to close the circuit of goodwill that has benefitted so many, to leave the door ajar for the next generation, and to file away the good deed that marked the point at which he feels the balance of life tipped in his favour. He brings with him four sons and three of their wives who lovingly support him in his quest.

‘Returning to Eastbourne College has been something he has been looking forward to for ages,’ enthuses Peter’s eldest son, Phil, as David Stewart, Director of the Eastbournian Society, tours Peter and the rest of the Homburger group.

As he tours, Peter is keen to hammer home his core message, variations of which he repeats during the afternoon,

‘What a lot of people don’t know,’ recollects Peter, ‘is that John Nugee (headmaster at the time) was a great guy.’

He pauses, and then continues with emphasis on the progressive nature of what happened prior to his escape from Germany (the context of which must be viewed against a backdrop of growing prejudice against Germans among English hearts and minds),

‘…he sent a letter to all parents in 1939 asking for their approval for him to allow at least one, and later two more Jewish refugees from Germany to attend the College. He received not a single negative reply and so my brothers and I attended the College. For us, the College motto said it all (Ex Oriente Salus ‘from the East comes salvation’).’

The Homburger family continue their tour of the school, visiting the College’s dedicated Music School, the Birley Centre, where he is shown into the Homburger Room, dedicated to Peter as a benefactor. He was a keen and talented musician while at school, singing in the Chapel Choir and playing the violin and viola in the school orchestra. Later, while in the US Army, he formed and directed choirs in Japan and Korea. For 21 years, he directed an award-winning civic choir of over 80 voices which appeared throughout Colorado and whose performances were broadcast on radio and television.

The Birley Centre building is an example of the virtuous circles created when people collaborate on a project that evolves from a deep connection and goodwill. Since opening its doors in 2011, the building has played host to countless art exhibitions, conferences, concerts, dance workshops, musical ensembles, singer-songwriter workshops, and has become a hub for the people of Eastbourne and professional artists to use as they see fit; it is referred to as the Eastbourne Birley Centre, not Eastbourne College’s Birley Centre.

Next up, Peter is shown into the newest of classrooms that bear his name, an economics classroom in the Nugee Building (named after his headmaster and saviour). A certified public accountant by profession, he is well equipped to chat with the Head of Economics and share some technical anecdotes; those listening hang on his every word.

Winding their way through more corridors, the group make their way to the old cloisters where they recreate a family photo from an earlier visit to the College back in 2001. Pupils walk by intrigued, some smile and say hello, others give a nod of respect as they subconsciously note this family’s connection to the school. The tour moves on to visit School House (a boarding house) and College Chapel where Peter would have spent a great deal of time with his peers and the Choral Society. He moved into School House in September 1945 having spent three years at Radley College, Oxfordshire, to where Eastbourne College was evacuated during the early years of the war. Local legend has it that the school was relocated within a day after headmaster John Nugee tasked the head boy with rounding up the whole school ready for immediate transportation. That night, around 180 Eastbourne College pupils slept on gym mats on the floor of the Radley College sports hall.

On his way past School House, he recollects,

‘The food was good, we cooked it. I cooked the porridge. The food was taken in the houses. We were allowed one egg per month.’

‘This is a great deal better than when I was here. We couldn’t buy all this but we did like buying chocolate when we could.’ He smiles.

The current headmaster, Tom Lawson, pops by to say hello and Peter takes the opportunity to chat and show interest in an Old Eastbournian tie and baseball cap which he takes as a souvenir of his visit.

Returning to the College after a midday break, Peter was taken to meet Head of History, Tim Spears, and a group of pupils and staff, to answer some questions they had prepared. Here are his answers to some of the questions posed:

Pupil; ‘What was it like going to school in Germany before war broke out?’

Pupil; ‘Do you think anything could have been done to prevent the rise of the Nazi Party at that time?’

Peter; ‘Not really. If the German Army had revolted, they could have beaten Hitler in the early days.’

Pupil; ‘Did you ever consider converting to another religion in order to escape the persecution?’

Peter; ‘I did and I am the only one in the family who ever did so… but it wasn’t because of the Nazis. I converted to Christianity when I was a teen and I did it because the girl I wanted to marry was Christian.’

Pupil; ‘Have you ever been back to Germany since you escaped the Holocaust?’

Peter; ‘I have been back to Germany many times since, it’s a lovely country. One time, my home town of Karlsruhe invited those who left on the Kindertransport back and they really took care of us. There were so many of us they had to celebrate twice.’

Pupil; ‘You were parted from your parents for many years. Were you able to keep in touch?’

Pupil; ‘Did you or your family ever receive any of the post-war reparations levied against Germany?’

Peter and Phil Homburger; ‘Some reparations were awarded but it has been a difficult journey. Often it has to go to a living Kindertransport person; many aren’t alive so many families have been disinherited from the opportunity. What can you say, it’s money we’re talking about.’

Staff member; ‘Do you think it is valuable for children to visit the concentration camps of Dachau and the like?’

Peter; ‘I think it is a great educational event to go and visit Dachau and other camps.’

Pupil; ‘Did you ever experience prejudice while you were in Britain?’

Peter; ‘I never experienced anti-Semitism in the US or Britain. There was prejudice against Germans after the war though.’

Pupil; ‘What was your favourite memory from your time in Eastbourne?’

Peter; ‘My favourite part about Eastbourne was the doughnuts!’

Pupil; ‘Do you still have faith in humanity?’

Peter; ‘Oh yes, oh yes, just look over there at my family.’ He glances warmly in the direction of his family and the room erupts in spontaneous applause.

An emotional and epic 45 minute Q&A session, ended with the headmaster presenting Peter Homburger with a special tie, elevating him in that instant to Prefect, an honour which eluded Peter as a pupil. 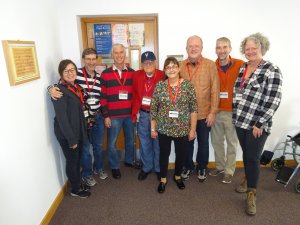 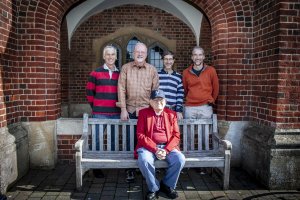 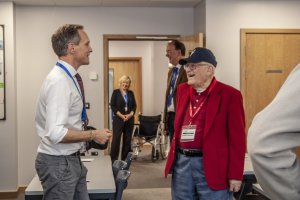 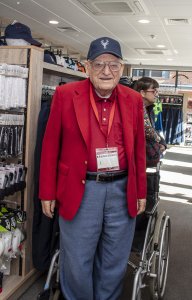 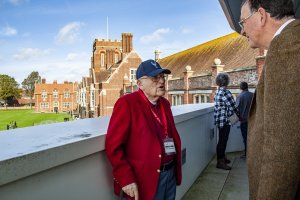