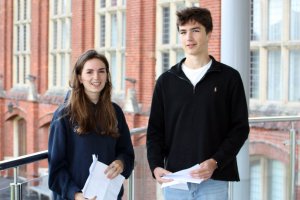 The electric engine of the academic year is up to full speed and we’re only a few days in! Tuned-up timetables, super flexible weekends and enhanced co-curricular herald a new era at Eastbourne College, and a sense of engagement and purpose that oozes even greater success in the years ahead.

For one family, the summer of 2019 marked the end of an era, one that is well worthy of mention. Meet the Incredibles, otherwise known affectionately as the Meikle family.

Twins K and W Meikle are two of four siblings and a family that were part of the College community for over ten years. Like many pupils at Eastbourne College they were very happy with their exam results this year, receiving four As at A-level, in subjects ranging from Economics and Physics, to Maths, Further Maths and the Extended Project Qualification (EPQ). But the story doesn’t end there.

Far from it in fact. It transpires that not only did they get four straight As at A-level, they also achieved 18 A*s and 4 As in their GCSEs; and there’s more.

A quick dig into the archives shows that the twins’ older brothers, Archie and Robert, also achieved outstanding results. Archie, the eldest of the four siblings, achieved ten A*s and three As at GCSE, and one A* and two As at A-level (among other grades). Robert was awarded no less than 12 A*s for his GCSEs and three A*s and two As for his A-levels.

Importantly, all four siblings took at least three A-levels, the gold standard that is expected of Eastbourne College pupils.

Truly an incredible family, between the four of them the Meikles have notched up a total of 15 A*s or As at A-level, and a massive 47 A*s or As at GCSE!