In the year that the College celebrates its 50th anniversary since the introduction of girls in 1968, it is fitting that the girls tennis team is hoovering up the accolades.

The team’s most recent success, winning the U18 Sussex County Championships yesterday, was down to the hard work and commitment of Phoebe, Summer, Emily and Aziza as they powered through Bedes B, Ardingly College, Lancing College, Brighton College and then Hurstpierpoint College in the final. Demonstrating great strength in depth, the girls B-team reached the semi-final as did the boys A-team.

Eastbourne College has gained a reputation for tennis excellence in recent years. The College runs a year-round elite programme which has resulted in some outstanding success for the top teams, while serving up a salver of virtuous circles that benefit all pupils interested in tennis.

Adding to the College tennis mix, this year, for the first time, a number of Eastbourne College pupils are being trained up as ball boys and girls for the Nature Valley International tennis tournament at Devonshire Park in late June. While not directly related to participation in competitive tennis per se, the enhanced link with a top-level tennis tournament, hosted on the school’s doorstep, combined with outstanding support, make the College a go-to option for tennis-loving families in the South East. 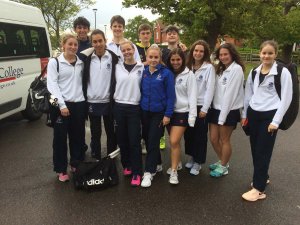