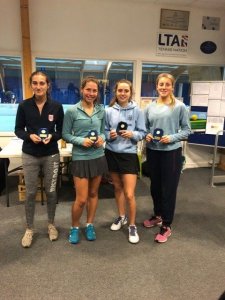 Our ace tennis girls were in action last week at the LTA U18 doubles finals regional tennis event at Bromley. In the final, College girls Phoebe and Summer won against Antoinette and her partner. Summer also reached the semi-finals of the U18 singles while Phoebe has had success elsewhere winning qualifying matches to make the main draw of GB tour tennis events at Taunton and Tipton. These events are aimed at junior players who are playing at national standard. Another College representative, Aziza also played at the events and the standard of play, from each and every one of them, was superb.