Jerusalem (which is an A-level set text) is rooted in an English country community involving gangs and gypsies, among other socioeconomic backgrounds. The play explores rural life in England, centred on Johnny ‘Rooster’ Byron, an egotistical and morally perplexed man wanted by the officials. Johnny’s stand against the hypocrisy of modern suburban life is shocking, moving, and a wonder to behold. Though Johnny may be a modern man, he has the spirit of England’s legendary giants of myth.

As teachers of drama, we actively encourage pupils to question the norm and create work that will challenge opinions. Butterworth says of his writing process for Jerusalem,

‘I wasn’t really trying to write about England particularly, although obviously I was writing about a certain community. But I was really trying to summon up an anxiety that I had about change.’

In a social and political climate where change is imminent, Jerusalem tells the story of a country we almost recognize in the midst of reformation, juxtaposed against a mythical and magical England held largely in the imaginations of its people.

Jerusalem reawakens something that we didn’t know we had missed. Maybe of patriotism, but if not, certainly a sense of belonging to something, while questioning what effect change has on tradition. 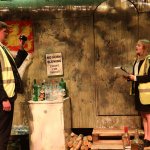 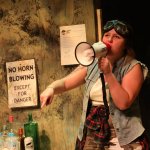 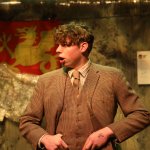 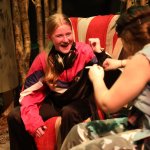 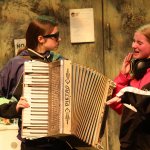 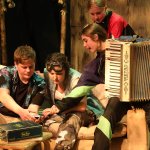 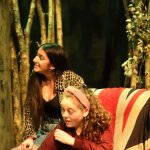 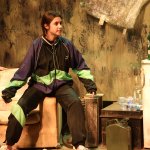 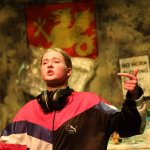 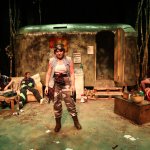 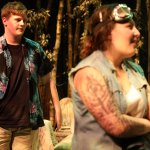 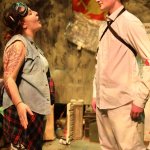 Please note, the grammar, syntax and spelling of some words/phrases have been purposefully altered to reflect the script and enhance the reading experience. Some readers may find some references offensive – Jerusalem is for over 16s only.

Parties in the woods, teenagers dancing around campfires, invocations of mythological spirits and challenges to authority; hang on, I thought, this all sounds vaguely familiar and the last one didn’t end well for a few of the villagers. Not The Crucible and Salem however but deepest In-ger-land. Here at least the English trees had a few leaves, puh, not like that bleak American set before. Nice parking of the caravan. Classy. Audience anticipation: high.

On the principle that ‘less is more’ what a great opening [in cinematic terms it’s ‘the money shot’ beloved of directors for establishing where we are and setting the tone of what is to come.] Weirdo fairy gurl and the classic anthem of Albion, Jerusalem [penned by Blake who loathed everything that his toon has come to represent, a neat ironic twist] booms out; cue shell suits and mystic drug-hazed dancing; cue Da Law, in the shape of the Health and Safety Executive fluoro jackets and clipboards. Things warming up very nicely as the megaphone diplomacy begins!

Rooster alert, the cock of the walk! No KFC wannabe this was the real meal deal. Impressive and delightfully disgusting, even down to the pint of egg slurry which brought a satisfyingly unified ‘yeuch’ from the punters in the crowd. Ooh, squirmy wormy, we thought. This is re-volt-ting! Tattoos rippling he struts the space and demands R.E.S.P.E.C.T. And gets it.

Ginger [or as it must be pronounced in Sarf Lunndun/Wiltshire ‘Jinnjah’], pops in to be regaled with what he has missed. A lot. A lot of sex, drugs and rock and roll from the looks of things. [Well done the props department: above and beyond the call of duty]. In fact his splendid bemusement of being the one who is always on the catch-up throughout the whole play was a well held device. Some great comic lines and some great telling glances of disbelief and incredulity mixed with a nagging doubt that perhaps Ol’ Roosty boy might not be lying; well, not all the time.

Like a parental post-teen party nightmare, characters emerge from all sorts of unexpected places; a large form erupts from underneath the cushions; sofa, so good, I thought. He of wild and unlikely dreams of Aussie paradise, like a hibernating sloth encountering daylight for the first time in months, began to reveal to us his sorry tale of delusions and escapism. I think he’ll fit in well in Oz where the expletive is not knowingly underused…but behind all the bravado there is clearly a yearning and a concern for something more substantial than running away from life.

Entangled behind the settee are two teen tartlets; or victims; or just deluded darls? She of the ‘badger poo jacket’; what a great line and a great hairdo! Along with her twinny in ‘pardy’ fun, her fishnetting friend held the line between wanting to play with the big boys now and the sense of being way out of their depth, well. Cast adrift in the wild woods of emerging adulthood, the teddy bears picnic was beginning to look a bit like a nightmare. Great moment with Trivial Pursuit: top cameo comedy. Great timing!

Davey boy, also a fashionista disastah, was epic as the edgy go-between, at times supporting the rocking Rooster, at times clearly seeing that the roller coaster of progress was going to bulldoze him into the ground. Great confidence, luvverly shades and some well-crafted moments where lines were held for effect.

Wezza, what can one say? Anyone who wears bells is asking for trouble. Wearing them and getting away with it takes some skill. I loved the way he brought in news from afar (well all the way from from the village fete), and kept popping back to where the real action was, in the woods.

Ah the Professor! Well done squire. Loved the wheelbarrow, the vagueness and the slight air of being ever so slightly out of touch with the real world of homeless vagrants and airheaded youf.

Marky milked the ‘ah, isn’t he sweet’ role without becoming too cloying. So Rooster has a family; interesting. He has responsibilities; also intriguing. Not quite the freewheeling drifter he’d like us to believe; also interesting. So Marky’s edginess around ‘dad’ marks an important shift in relationships. Which brings us neatly to the long suffering Dawn, looking like a central casting selection from EastEnders. Nicely done darl! Tricky to take on the Rooster but you managed it well and the central steely core appeared just enough to convince us that you meant business.

Which just leaves the sinister Troy, also favouring the tat parlour I noted, although clearly they needed extra ink to cover the expansive troyceps. Nasty piece of work. Means business. Master of the scowl and freezing-water-at-50-paces look. Suddenly ol’ Jinnjah seemed a bit weedy and wished he was elsewhere as the big Daddy bear came out to play.

And so the fairytale ended. Pwincesses, even for a year, may fade; dreamers, bowed and bloodied, may be beaten down; myths and woods may be bulldozed. And yet…the anarchic, rebellious, foul-mouthed, irreverent may have a very real place to play in the richness of a community increasingly run by sterile clipboard-wielding councilors.

Well done to you all. It was a real treat to enjoy you lot obviously enjoying it all.

Come along to Hamlet next Wednesday in the Le Brocq Theatre when the English Department attempt the impossible by performing a ‘play in a day’… well, half a day actually; well more like four hours to be fair… Fun? You betcha!

Find out more about creative arts opportunities at Eastbourne College