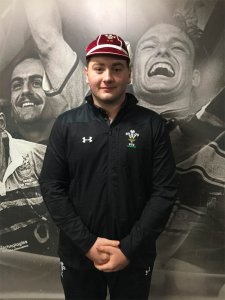 Just a few weeks ago, we were congratulating him about his selection for the Welsh U18 training squad, and now Theo Bevacqua comes on as loose-head prop to secure his first international cap for Wales U18s and victory over France.

The U18 international match, a warm up for their upcoming Six Nations tournament, was an emotive occasion, made more so by the fact that the venue was Cardiff Arms Park. The day before, crowds of around 50,000 (and millions around the world televised) bore witness to a thundering Welsh performance that won them the Grand Slam, after thrashing Ireland 25 – 7 in their finale of the Six Nations. Warren Gatland, in his 50th and final Six Nations, became the first coach in the history of the tournament to win three Slams.

The Welsh Women’s side also added to the Cardiff Arms Park home achievements, as they notched up a great victory over Ireland the next day; with back-to-back Welsh victories, it was up to the Welsh U18s to make it a hat-trick on Sunday.

The U18s got off to a shaky start and France were strong and decisive, capitalising on a Welsh sin-bin incident and some poor lineout organisation. At half time Chris Horsman’s Welsh side found themselves 0 – 15 down. The second half told a different story as Wales began their comeback with tries from the off. As Wales drew level, Horsman took the decision to roll out his replacements, including Theo, who instantly made an impact coming on as loose-head prop. Demonstrating great character, levelheadedness and maturity, Theo helped the Welsh side fight back against a clinical French pack and the free-flowing flare of the three quarters and back line. Then the tables turned for good. Following another converted try, Les Blues were reduced to 14 men after one of their players was yellow-carded. Wales took the advantage, creating three more tries in the dying minutes of the game, taking the win and a momentous hat-trick for the Celtic nation; final score Wales 31 – 22 France.

Huge congratulations to Theo for his first international cap and the win. We wish him and the Welsh team the best of luck in the upcoming U18 Six Nations tournament.