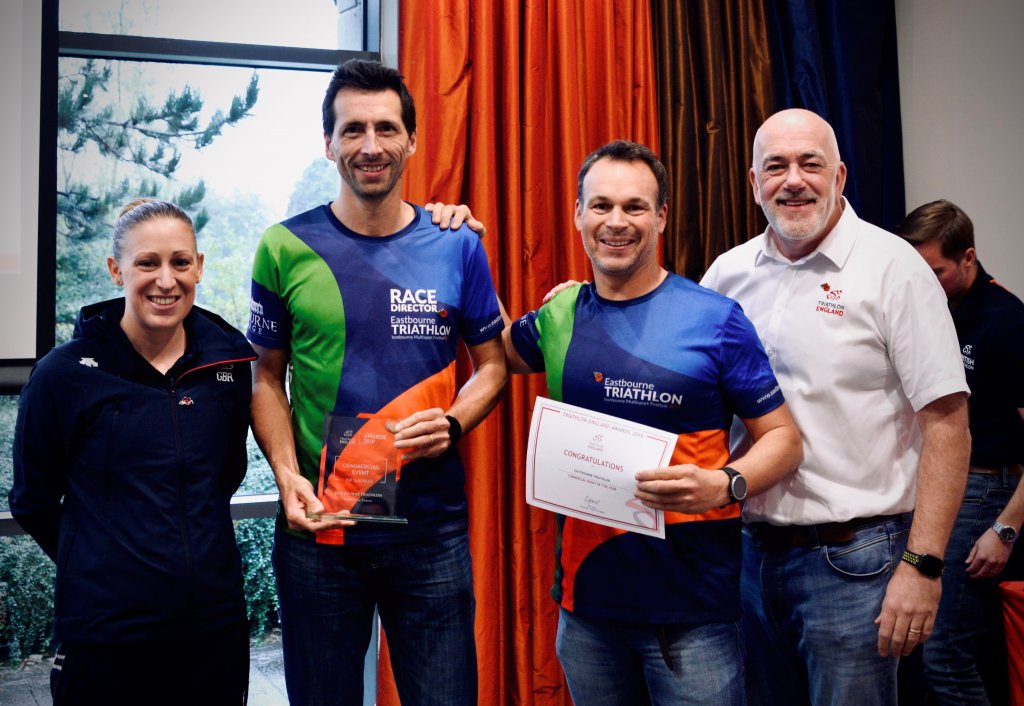 The Eastbourne Triathlon (by Ironbourne Events Ltd) has won the coveted Triathlon England Commercial Event of the Year Award. The award was presented by Commonwealth Games gold medallist Jodie Stimpson at the recent Triathlon England annual awards presentation in Birmingham.

The event, which has Eastbourne College as its headline sponsor, takes place at Eastbourne’s Western Lawns each June and consists of both sprint and standard distance triathlons. In this year’s sprint race, over 60 novice triathletes, including many Eastbourne College pupils and staff, were among over 140 competitors who completed the 750m swim, 20km cycle and 5km run. 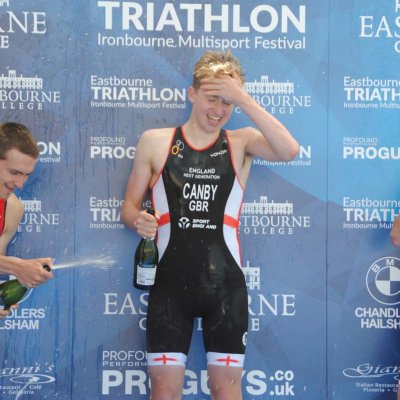 We are very proud that Eastbourne Triathlon has been recognised as the best triathlon event in the country. Triathlon England has recognised our commitment to delivering an amazing race day experience for all our athletes, and especially the support and encouragement we offer to the many novices who choose our event as their first triathlon. We hope to see many more local Eastbourne residents having a go at our event next year.

Following the resounding success of the 2019 event, the British Triathlon Federation has selected the 2020 Eastbourne Triathlon as an ETU European Championships qualifying event. The best age-group triathletes in the country will be racing in Eastbourne for the opportunity to represent Team GB at the 2021 European Championships. The event will take place on Sunday 14 June 2020 and entries are now open, with more information available at www.eastbournetriathlon.co.uk. In addition, it was announced yesterday that the event has been included in the Triathlon England South East Senior Series.

Ironbourne Events have recently announced they will be bringing a new long-distance triathlon event to Eastbourne in 2020. On the 12 July around 300 athletes will take on what is widely considered to be one of the ultimate endurance sporting challenges. This event will provide a Sussex-based alternative to the world-famous (and world-wide) Ironman event calendar which draws close to 100,000 participants each year.

In what is likely to become one of the most iconic spectacles on the triathlon calendar, athletes will be starting the swim leg with a jump from the end of Eastbourne’s historic pier. Having completed 2.4 miles of swimming, competitors will then complete 112 miles of cycling before returning to Eastbourne via Beachy Head and then finishing with a full 26.2 mile marathon along the seafront. Alongside the full distance race, there will also be a middle-distance event raced over half the distance.

keen to get involved?

With a 6.00am swim start, the fastest long-distance competitors will finish in a little over eight hours, whilst others will take up to 17 hours, finishing before the 11.00pm cut-off time. This will be an amazing opportunity to witness athletes taking on one of the ultimate sporting challenges, and it is hoped that many local residents will offer support and encouragement to the competitors throughout the day. Ironbourne Events are also looking for local volunteers to help marshal the event. More information is available at www.140.6miles.co.uk.